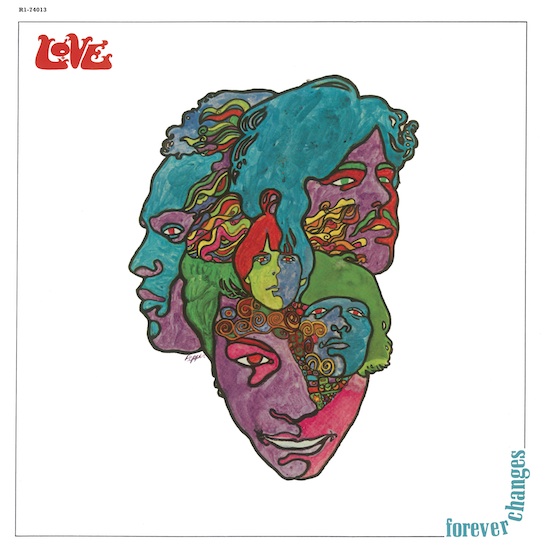 Forever Changes has been inducted into the Grammy Hall of Fame and the National Recording Registry. Rolling Stone ranked it #40 on its Best 500 Albums List.

Better than John Coltrane at his moment of spiritual ascension? This I gotta hear!

I was completely unfamiliar with Forever Changes before I began this series because it isn’t in my dad’s collection. He traded in his copy a few months after he bought it but didn’t remember much about it. The only thing I knew about Arthur Lee and Love is that they produced one of the greatest garage songs ever, “7 and 7 Is.” The quality of that song led me to overcome any skepticism generated by Rolling Stone’s opinion (they have so much weight with me) and the “uh-oh” feeling generated by the Grammy induction. I really looked forward to listening to Forever Changes.

I have now listened to Forever Changes intensely and completely six times just to make sure that the reaction I had after the normal three spins was an honest, thoughtful and considered reaction. It was: in fact, I had the same reaction after the first, second, third, fourth, fifth and sixth time around and the reaction not only remained stable but increased in intensity. I will now share my statistically valid response to Forever Changes.

I can’t believe anyone in their right minds would think this record had much value, much less try to tell me that it’s better than anything The Kinks ever did, better than The Stones’ best album or in the same league as A Love Supreme. I began to wonder if this was one of those situations where a mover-and-shaker decides it’s a great album, so everyone says it’s a great album, like Pet Sounds and Astral Weeks. After reading the review on iTunes, I began to wonder if even the people reviewing the album had actually listened to it. The review opens with the line, “One of the psychedelic era’s most pleasing albums . . .”

Oh, yes. It’s so pleasing to hear lyrics like, “Oh, the snot has caked against my pants,” and “Sitting on a hillside, watching all the people die.” Ian Anderson used the word “snot” on “Aqualung,” and while I think it’s a great song, the adjective “pleasing” hardly applies.

Well, I did listen to Forever Changes and it’s anything but pleasing. Bland is more like it. It’s not psychedelically ear-shattering, noisy or cacophonous; it’s simply boring. Every song begins with acoustic guitar, and the repetition becomes quite annoying. Arthur Lee’s decision to overdub horns and strings may have worked had he possessed the musical talent of a George Martin, but he didn’t, and the overdubs sound more like the music that accompanies television commercials than credible artistic contributions. What I hear on Forever Changes is an American band trying very hard to sound like a mid-60’s British band and failing miserably. The back story of the recording describes a chaotic environment with drugs, conflict between Arthur Lee and contributing songwriter-member Bryan MacLean, band members replaced by session musicians, band members coming back and giving it a go . . . rather like a precursor of Let It Be. Arthur Lee dealt with the chaos by imposing his will, and while Forever Changes does have a sense of unity, there’s nothing underneath the hood.

That is because is large part Arthur Lee abandoned his original vision, as described in the Wikipedia article on Love: “However, after viewing a performance by the Byrds, Lee became determined to form a group that joined the newly minted folk-rock sound of the Byrds to his primarily rhythm and blues style.” Had Arthur Lee accomplished that, we might indeed have something here, but there’s hardly a hint of rhythm and blues on this record, and none of the songs make you want to get up and boogie.

Forever Changes opens with “Alone Again Or,” a composition that has been lauded by critics despite the fact that the tune was ripped off from Prokofiev. Critics were also deeply impressed with the contrast between the happy music and the sad lyrics. I was not, and I found the introduction of stereotypical Mariachi trumpets a superficial and offensive attempt to integrate Latin sounds. As for the lyrics to what one reviewer called “the best pop song ever,” well, read them for yourself:

Yes, the lyrics could have been written by a precocious eleven-year old who had heard almost all of these lines in other pop songs. This isn’t poetry: it’s a collection of fragmentary thought focused on a trivial issue.

“A House is Not a Motel” is Arthur Lee’s first contribution, a cascade of gibberish culminating in the disconnected rock cliché phrase, “You can call my name.” His vocal begins in a low register that slowly builds into intense passion (source unknown) and a screamed “all right now” that in turn leads to a shitty guitar solo. Forced is a good word for this song. “Andmoreagain” is Love trying to be The Left Banke; the vocal sounds like a Brit with his pants on too tight and the strings are pure Ray Conniff. Tiring quickly of the Left Banke, Love turns into The Bee Gees on Bee Gees’ 1st, producing harmonies that are eerily similar to “Every Christian Lion-Hearted Man Will Show You.” The lyrics are classic drug-induced nonsense: empty words imbued with meaning only to someone whose brain is incapable of processing complete thoughts.

In “Old Man,” MacLean drags out the wise old man who either speaks in parables or gives you a magic trinket to aid you on your quest. The trinket here is a tiny ivory ball, which begs the question, “If he’s a wise old man, why is he aiding and abetting the slaughter of elephants?” The wisdom the old man dispenses is the same “wisdom” The Beatles dispensed in “She Loves You”: get your head out of your ass and check out the hot babe in front of you:

MacLean’s efforts to sound British here echo my dad’s description of how every American boy affected a British accent after watching the Beatles on Ed Sullivan.

“The Red Telephone” is where you’ll find the line about watching people die. You’ll also hear more drug-induced neurotic ramblings. It could be describing a descent into madness, but I don’t think Arthur Lee had the negative capability of a Keats to pull off the necessary level of detachment. The one good thing about this song is the line “We are normal and we want our freedom,” a line lifted from Marat/Sade which the Bonzo Dog Band put to much better use in the opener to The Doughnut in Granny’s Greenhouse (Urban Spaceman to you Yanks). It’s followed by another insult to the Mexican people, “Maybe the People Would Be the Times or Between Clark and Hillsdale,” which faithfully adopts the artistic dogma of the times that your song or your movie must have a very long title that no one can possibly remember.

Still waiting for a glint of originality, I’m certainly not going to find it in a song with a cliché for a title, “Live and Let Live.” This is the snot song mentioned above, and surprisingly, this one has at least a germ of an idea before Arthur’s ADHD kicks in and he goes a-wandering. He seems to be satirizing the American propensities for gun violence and conquest, but never really comes up with the killer line to clinch the deal:

“Why can’t you understand?” or some version thereof was a common theme of the 60’s generational wars: the same theme you hear in “She’s Leaving Home,” in various teenage angst songs and, more gruesomely, in the movie If. To borrow a phrase from the times, it’s a total cop-out, a rhetorical question used by a bunch of whiners who couldn’t express themselves well enough to make them understood. They really didn’t want an answer to that question, because that would have required them to engage in dialogue with people they’d already judged as hopeless straights.

Yet another long title awaits us in “The Good Humor Man He Sees Everything Like This,” so I guess Arthur Lee saw a lot of movies during this period, a pretty easy habit to fall into when you live in Los Angeles. The ninth song in a row to begin with acoustic guitar, I tune out immediately when I hear the Herb Alpert trumpets which alert me that Dionne Warwick might show up at any minute. The song is the equivalent of a babbling brook with a heavy emphasis on the babbling. It’s followed by “Bummer in the Summer,” an Arthur Lee rap where the title describes the quality of the song. Thankfully, Forever Changes ends (hooray!) with what turns out to be the best song on a bad album, “You Set the Scene.” Yes, Arthur Lee overplays his Johnny Mathis tendencies and the strings go over-the-top in the middle and yes, the lyrics make no sense when taken as a whole . . . oh, fuck it. I’m tired of trying to make something out of nothing.

I am amazed that a dull album with such an obvious lack of originality could be rated so highly, but I’ve always had a tendency to expect more from the human race than it deserves. After I wrote the review, a Baby Boomer left a comment describing Forever Changes as a satirical look at the hippie movement and all the silliness going on at the time. I decided to give it another spin and listen to it from that perspective and . . . well, maybe it’s the blonde effect, but I guess I’m just too fucking dense to hear the satirical nuances. Maybe the caked snot line was an attempt at parody, but if that’s the case, Arthur was a very heavy-handed satirist.

No, I’m not buying it. Forever Changes does belong on a list: my list of seriously overrated albums. Arthur Lee and company have now joined such luminaries as The Beach Boys, The Beatles, The Who, The Rolling Stones and Pink Floyd on my mythical “Seriously Overrated Albums List.”

Congratulations, guys, and have a wonderful Fourth of July!

GO TO THE NEXT POST IN THE SERIES: AXIS: BOLD AS LOVE BY THE JIMI HENDIX EXPERIENCE