Mott the Hoople – All the Young Dudes – Classic Music Review 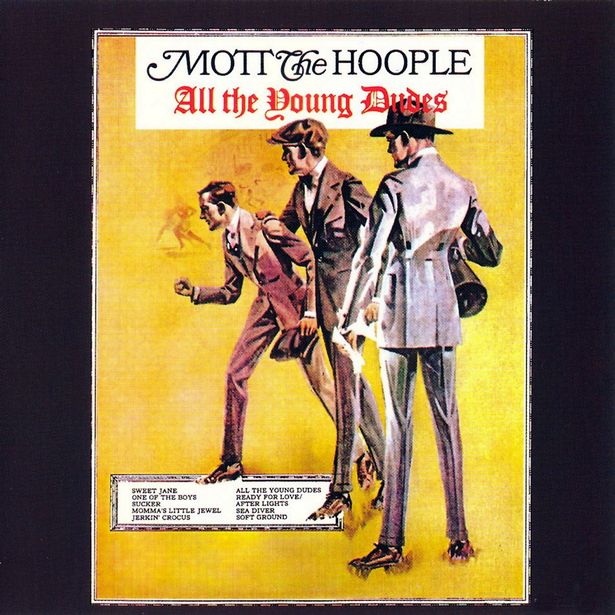 David Bowie to the rescue!

In his guise as Glam Rock Lone Ranger (with a much more elaborate mask, I’m sure), David Bowie received intelligence from Mott the Hoople’s bass player that the budding glitter band had decided to call it quits. Alarmed, he rode to the rescue and offered them “Suffragette City,” one of the great rock numbers of the 70’s. At that point, Ziggy Stardust hadn’t been released, so this was an exceptionally generous offer.

They turned it down.

That should have told Bowie that these guys were major prima donnas, but our hero was undaunted and quicker than you can say “Hi, ho, Silver!” he penned “All the Young Dudes” just for them and further offered to produce Mott’s new album. They finally agreed, and the rest is glam rock history.

Bowie would come to his senses later that year and end his fledgling relationship with the band, but for one brief shining moment in 1972, the collaboration worked. All the Young Dudes was the best thing Mott the Hoople ever did (though their follow-up, Mott, outsold it by a wide margin). The reason it worked is because David Bowie was at the top of his game as an artist and as a producer. It’s also one of the albums that mark the great turning point of the early 1970’s, when the march towards fragmentation into sub-genres would accelerate, and rock would become as cliquish as an American high school.

The album opens with Mott’s version of Lou Reed’s “Sweet Jane.” Here the producer’s touch proved to be crucial. Rather than attempting something rough and raucous, Bowie softens the arrangement by placing acoustic guitar at the center of the mix. The arrangement doesn’t have the sheer power of Lou Reed’s live version, but is more effective in bringing out the ironic nostalgia of the lyrics (ironic because Jack is in a corset, after all). Electric guitar is limited to simple rhythm support and Mick Ralphs’ occasional guitar fills, counterpoint and the closing solo, where he stays within the parameters of the arrangement, sticking with a more mellow and melodic approach instead of following his instinct to let it rip. Ian Hunter’s vocal is also suitably restrained, and he only pushes it during the “Anyone who had a heart” verse, the emotional dénouement of the song.

Mott the Hoople was a damned good rock ‘n’ roll band, and they demonstrate that talent several times on All the Young Dudes. “Momma’s Little Jewel” is a flirtatious, sexy little number with hot sax (played by Bowie) and piano highlights supporting the main guitar riff. The band gets to drive it on the chorus, picking up the rhythm with effective use of syncopation. Ian Hunter nails this sucker, with a studiously casual approach to the blue notes.

“Momma’s Little Jewel” literally collapses into the opening guitar riff of “All the Young Dudes,” one of David Bowie’s early-period classics. Ian Hunter delivers another solid vocal and the supporting vocalists who carry the chorus carry out the task with smoothness and finesse. Contrary as always, Bowie insists that the song is more apocalyptic than anthemic, but the listening public paid little attention to the odd little sparks that flew through David’s brain from time to time, and pronounced “All the Young Dudes” the anthem for the post-Beatles-Stones mini-generation. How could they not with lines like, “Oh, man, I need TV when I got T-Rex,” and its explicit rejection of 60’s idealism:

And my brother’s back at home with his Beatles and his Stones
We never got it off on that Revolution stuff
What a drag . . . too many snags.

Speaking of explicit, “Sucker” is one of the first songs that dealt directly with the sadomasochistic experience, a dozen years before “Darling Nikki.” Here I have to disclose my bias as a practitioner and declare the song fucking hot! Two verses in particular get my sadistic juices flowing:

Hi, there! Your friendly neighborhood sadist!
Want to take you for a ride,
Come on tell me ‘bout the nights that I make you cry,
Two tiny purple hands crawling out across the floor,
All I could hear was a voice, “Give me more more more!”

Good games, play games, no names
Well, that’s all right if you can stand the pain.
You can smoke my cigar all night through the link in your chain.
Stand up baby, it’s time to go,
Well, look what’s here! . . . maybe if we do it slow . . .

If I weren’t already worked up, “Jerkin’ Crocus” would certainly put me there. A fab ass-out-of-your seat rocker reminiscent of “Brown Sugar,” the guitar work on this song, a mix of sharp rhythms and long sustains, never fails to get me moving. Mick Ralphs would get to show even more of his talents with Bad Company, but he sounds pretty dammed good right here. Kudos also go to Pete Overend Watts for a throbbing bass performance.

“One of the Boys” makes it three kick-ass rockers in a row, but hey, baby, I’m dripping like a bitch, so keep driving it home! I love the clever arrangement that opens with a dialing telephone that will ring as the song fades out, at which time someone will answer the ring and we’ll hear Mott the Hoople through the earpiece with the encore. Jesus Almighty, this song rocks! Starting with a teasing, tentative warm-up passage, “One of the Boys” soon explodes on cue with crashing power chords that shift my hips into high gear. Ian Hunter delivers his best vocal on the album: playfully defiant, sarcastically arrogant and terribly hot. Combined with their on-stage glam style, this song has gender-bending connotations that may escape the listener unaware of their schtick. Either way, it’s a great rock song with a more inventive arrangement than most.

Lucky for me, the next song gives me a little time to recuperate and recharge. “Soft Ground” is really a dreadful number, sung by organist Verden Allen, who can’t sing to save his life. Speaking of weak vocalists, Mick Ralphs takes the stage with “Ready for Love,” a song that he would take with him to Bad Company, where it would finally get the proper treatment with the more capable Paul Rodgers delivering the lead vocal. Mott’s version isn’t bad, but come on, anything with Paul Rodgers singing it is bound to be better. All the Young Dudes ends with the slow piano-and-strings opus, “Sea Diver,” which really takes Mott out of their style and fails to play to their strengths. The arrangement is overwrought in the context of the rest of the album, proving that even David Bowie in his prime couldn’t bat 1,000.

Stating the obvious, All the Young Dudes is an incredibly sexy piece of work, whatever your gender or sexual preferences. Although Mott the Hoople would soon collapse and the main players would find gigs elsewhere, their collaboration with David Bowie produced a gem for the ages.

Excuse me while I have a cigarette and a good, stiff . . . scotch.