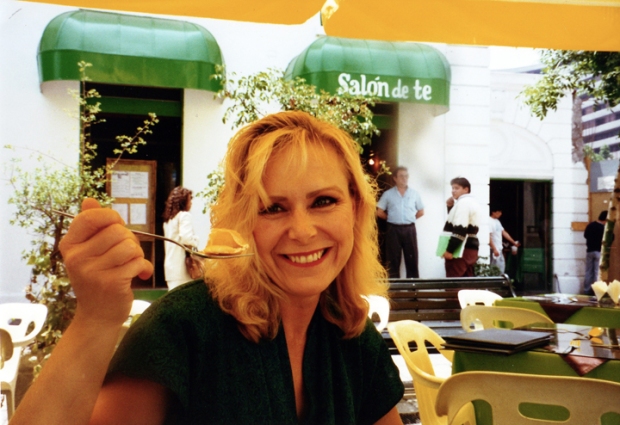 My mother selected this picture because it was a special mother-daughter moment. The shape of the pasta reminded us of the vulva and we had a good bisexual bonding moment as we ate vulva together. The picture was taken three years ago in Santiago, Chile.

Hello, I am Véronique, the mother of the woman you know as The Alt Rock Chick.

I am writing this because she has written little stories about our family that, while true, may give the wrong impression about us. I am very proud of the way we raised our daughter, though it may seem unconventional and sacrilegious to most. I will also say that I am very proud of the woman she has become, not so much for what she does but the reasons why she is who she is.

She has described us, somewhat carelessly in my opinion, as “flower children” and “hippies.” While it is true that both my mari (sorry, but I detest the English word “husband”) and I participated in many of the events associated with that era in history, I have an image of flower children and hippies that does not square with who we were and who we are today. There is an American word that accurately describes how I felt about most of the true hippies we knew, and that word is “airheads.” Many of them had no idea of the words they mouthed or the sources of the philosophy they pretended to espouse. Both my mari and I take knowledge and education very seriously, a character feature we passed on to our daughter. We are both very well read in world literature and philosophy, and while we certainly enjoyed the intellectual, sexual and spiritual freedom that marked that era in our development, I think we used that freedom more wisely than many of our peers.

This is important, for though my daughter’s birth was a complete accident (we succumbed to passion without protection), once I decided (and it was my decision) to have the baby, my mari and I thought very hard about how we were going to help this new being make his or her way in the world. We did not consult the experts on the subject, for much of that literature is faddish and often dangerous. After lengthy discussions, we concluded that the best advice on raising a child came from (though I doubt this was his intention) Jean-Paul Sartre. Quite simply, he transformed the Cartesian “I think, therefore I am” to “I choose, therefore I am.” We believe very strongly that to choose is to exist, and we decided we would raise our child on that principle. As soon as she was able to make conscious choices, we encouraged our daughter to make them and experience the consequences of those choices. That is how people learn.

Of course, we had to educate her on certain basics so she would not make choices that would limit her ability to make future choices, like running out in the street or getting too close to the fire. After all, it is wise to respect certain physical realities! Even when she was a little girl, we encouraged her to choose by not automatically saying no to her impulses and ideas, but by talking with her and helping her think through possible consequences of her actions so she could make an informed choice. We were aided in our efforts because my daughter (it is so difficult not to refer to her by name!) was a very precocious child with advanced intelligence at a very early age. I remember when we read to her she would concentrate on the text while we were reading, sometimes touching the words with her little fingers, as if she saw something magical in them. She could read many things by the age of four, in both English and French. I recall one morning I came in to the living room and saw our little girl resting on her elbows with her head in her hands and her little butt scooched up in the air reading an encyclopedia! “Do you understand what you are reading?” I asked her. She frowned and said, “Some of the words are hard but I go backwards and around to read the other words and guess.” She has always been a ravenous learner, and over the years we fed her appetite with volumes of classic and contemporary literature, history, philosophy, music and the social sciences as well as the many baseball histories in my mari’s library. However, we were careful to temper her education with the caution that elitism is an ever-present danger for those fortunate enough to receive higher levels of education, and I have noticed in her writing a very strong effort to avoid that tendency.

To facilitate her development and ability to make choices, we were never less than scrupulously honest with our daughter. We did not “talk down” to her or insult her intelligence by denying the ugliness or trivializing the beauty that exists in our world. As she has described in her post concerning her sexual development [note: this post has been moved to my erotic blog on Tumblr], rather than engage her in a vague discussion of “the birds and the bees,” I was quite precise and explicit in my descriptions of various sexual acts and the powerful emotions that sexual desire can generate. Some of the most important choices young people make in life have to do with sexual exploration, and to allow our daughter to enter into those situations without any awareness of the possibilities and the dangers in such liaisons would have been grossly negligent.

When I moved from Nice to San Francisco to attend university, one of the aspects of the culture I found astonishing was the American attitude towards children. For all the silly talk about family values, Americans treat their children like possessions, investments or second-class citizens. They are often embarrassed to be seen with their children in public! Until she was old enough to be left on her own, we took our daughter everywhere, to concerts, plays, baseball games, and fine restaurants. We rarely felt the need for a babysitter unless we had things to talk about like finances that would bore her. We treated her with respect and never allowed ourselves to act in a condescending manner. I believe this practice gave her a store of confidence to help her ride out the storms that are a part of everyone’s life.

Both my mari and I were raised in Catholic families, but that was a part of our personalities that we shed in our teens. Still, we encouraged our daughter to explore religion if she chose to do so, and in her early teens she went through a phase when she studied various faiths and attended services. Although we never would have interfered had she chosen otherwise, I was secretly relieved when she concluded she had no interest. She had concluded that all religions engaged in the oppression of women and could not believe that any system claiming an advanced level of knowledge could adopt such a crude and inhuman belief. “I don’t understand how they could say they have the truth and treat us that way” is how I believe she put it at the time.

The absence of religious indoctrination did not preclude us from teaching her certain values, while always explicitly reminding her that she had the right to reject those values. I believe she came to share many of our values because they resonated with two of her own philosophical leanings: one, that all people on earth should have equal access to the benefits of life; and two, that any belief had to stand the test of rigorous logic and critical analysis. Despite her passionate nature and her intuitive gifts, my daughter is an intensely logical person, and to her, the hateful elements of humanity such as racism, elitism, sexism, violence and prejudice make no practical sense whatsoever.

Her description of our house as one “filled with music” is no exaggeration. The first thing we do every morning is turn on the music, and it remains on all day unless we choose to watch something on the television. Though my daughter was trained in both classical and jazz styles for the flute and has a very good understanding of music theory, I think that the experience of listening to a diverse collection of music throughout her life has been more valuable to her in her quest to understand the historical development of music than formal education. We do argue over her exclusion of classical music in her definition of “popular music,” but that is a very pleasant debate to have with one’s child.

So, yes, even with all we have in common, we have our differences. She has never quite mastered the art of subtlety, and her willingness to share her sexual and erotic experiences is far too exhibitionist for my tastes. I personally believe she has made a terrible mistake to continue to work in the business world, for despite what many would call her remarkable success, I believe she is wasting her talents on trivial matters. As I wrote that, I found myself smiling, for the last time I broached the subject, she told me, “Fuck off, maman.” I am very proud that my daughter feels she can curse at me like an old friend.

I am also very proud of what she has accomplished through her writing, although it frustrates me that because of the strange norms of the business world she is unable to use her name without fear of being sacked. It is hard for me to judge without parental bias, but I thoroughly enjoy her writing and find it far more intelligent and perceptive than most music criticism. While I wish she would pick up the pace on her reviews of the great jazz artists and I completely disagree with her low opinion of Abbey Road, I continue to respect her choices and beliefs, and I believe it is that respect that has helped make her the wonderful young woman she is today.

Thank you for attention, and I now return control of this blog to ma chère fille, The Alt Rock Chick.